The Best Guide to Chinese Consumer Behavior on WeChat (2017) 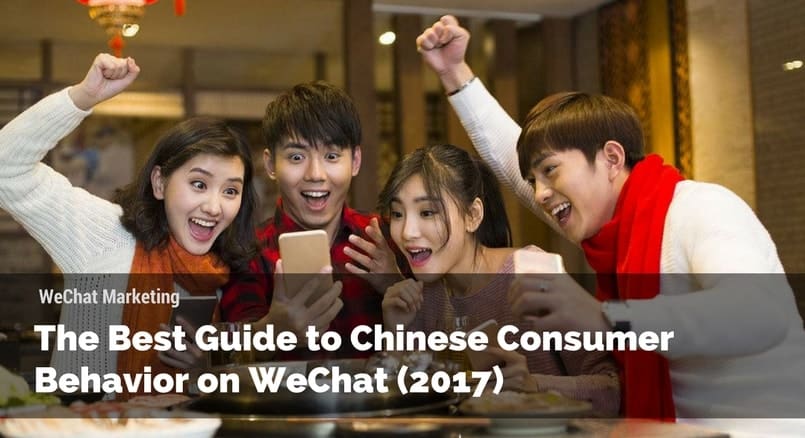 The Best Guide to Chinese Consumer Behavior on WeChat (2017)

by Raymond Lam
in Marketing in China, WeChat Marketing
Comments

The habit of using WeChat is ingrained in Chinese consumer behaviour. The popularity of this application has been growing at a breakneck speed since its launch in 2011. The application allows Chinese people to be immersed in the convenience and rapidity of virtual communication and online interaction, improving their daily lives and work. 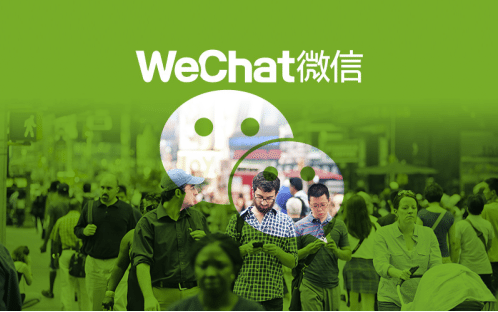 Chinese consumer behaviour exhibits a steadfast loyalty to WeChat. The application’s monthly active user base in China totalled 706.7m in 3Q2016, which is equal to 93% of the company’s global count. We expect the rapid growth of the user base to continue, although the trend will be localized in China. The number of monthly active WeChat users from 2Q2010 to 3Q2016 is given below: 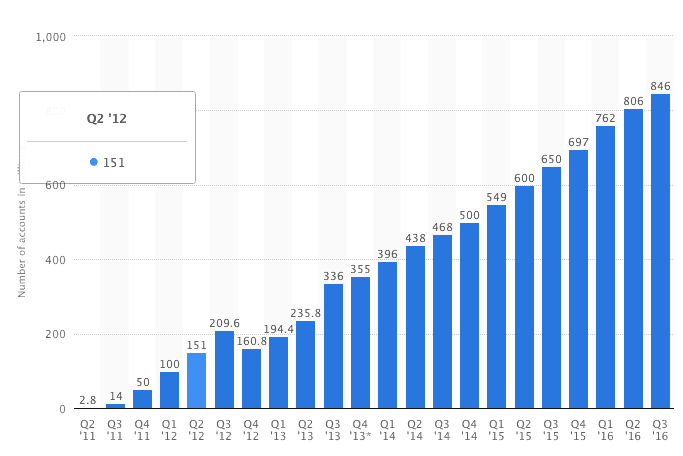 So far, WeChat has been not really successful in its attempts at international expansion. Yet, Tencent’s executives are not disappointed at all as the dominance of the application in the Chinese market is as undeniable as it is important. So far, the application has been often used in Southeast & Southern Asia and Latin America.

As a people, the Chinese are enmeshed in the socioeconomic tides of our time and keep up with the pace of the rapidly evolving Chinese consumer culture. They are increasingly reliant on devices such as tablets and smartphones. From their standpoint, WeChat has become a ‘must-have’ application for their phones and an integral part of their life.

Understanding Chinese consumers means grasping that the prospect of not having WeChat is unimaginable to its avid base of fans. The convenience of WeChat has become as essential as the device upon which it is installed.

What is WeChat for consumers?

The land of WeChat is a beautiful virtual place that is filled with almost everything that customers need and want. 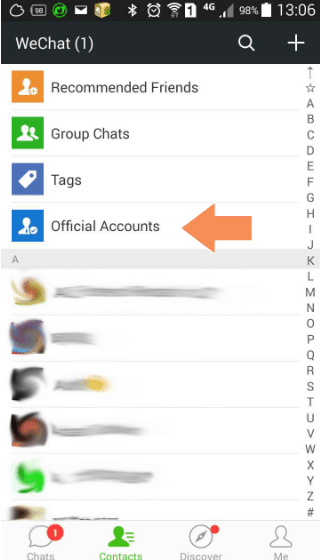 The program is an amalgamation of functions which provide users with text, voice, and broadcast messaging, playing video games and making video calls, sharing photographs and videos, reading content and keeping abreast of news, online shopping, some important life services, and location sharing.

Who are the main users of WeChat?

The gender structure of China’s population influences the Chinese consumer behaviour on WeChat. The country has world’s most skewed ratio at birth. As a result, Chinese men vastly outnumber women for years. That’s why there are more men (67.5% of users) than women using the platform.

Workers of various corporations are the largest and most important group of users (40.4% of users). These are people whose earnings are high and stable. These people possess a high purchasing power and devote a great deal of their time to leisure and shopping. Freelancers account for 25.3% in the user base. 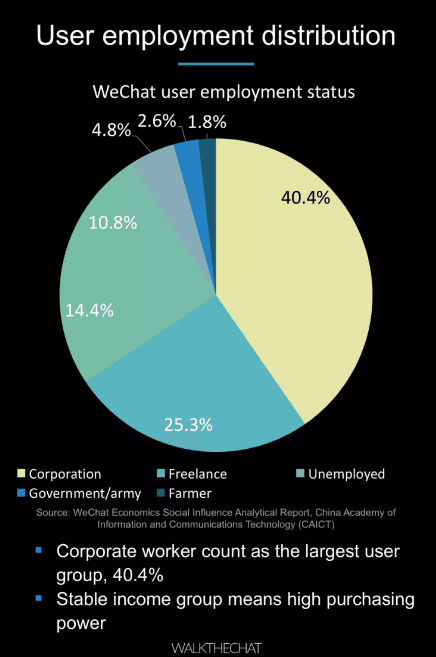 In the span of the next few years, we anticipate that more young corporate consumers and freelancers will use the application on a daily basis. That will lead to the higher growth in group chats and will bring in more new deals to WeChat.

84% of all these operators use public accounts for information release. Marketing campaigns and client interaction are also their important activities on the platform.

Due to the multifaceted nature of WeChat, numerous businesses and brands wish to have a substantial presence on this application, including Chinese and foreign entities. Thus, they can initiate marketing to Chinese consumers on WeChat. The platform is also expanding into other areas too, such as coupons, charities, and sports.

How much time do users spend on WeChat?

The frequency of using WeChat has been rapidly rising as its inventors reap the rewards that can only result from sowing seeds of excellence. WeChat has captured hearts of a great many Chinese consumers and has won their admiration and praise. The above is the backbone of the future growth and the further success of the application.

WeChat has a high user stickiness due to the large user base. 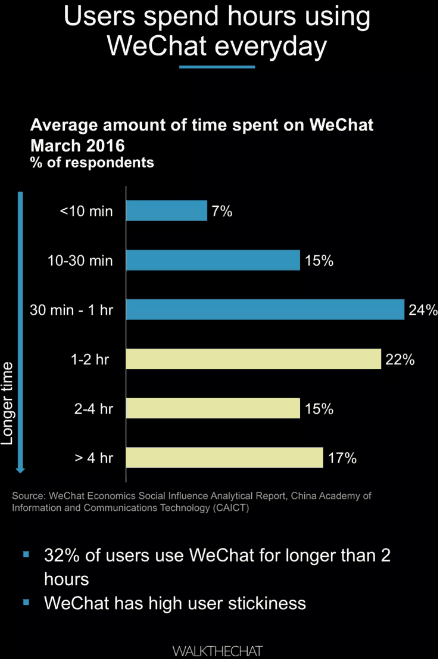 What are the main activities of the WeChat users?

Understanding Chinese consumers is inextricably connected with identifying the whole range of the many activities of WeChat users. The breakdown is given below:

61.4% of users check moments each time they open WeChat, and only 1.3% never check them. 61.4% of users pay more attention to personal lifestyle on Moments than to anything else, and only 29.8% focus on articles shared by friends.

WeChat users also like other posts, post content, and share it with their friends, and leave comments. Wonderful and versatile pictures and videos are the favourite content of the application’s fans on Moments. Simple text and articles attract consumers less than pictures and videos. 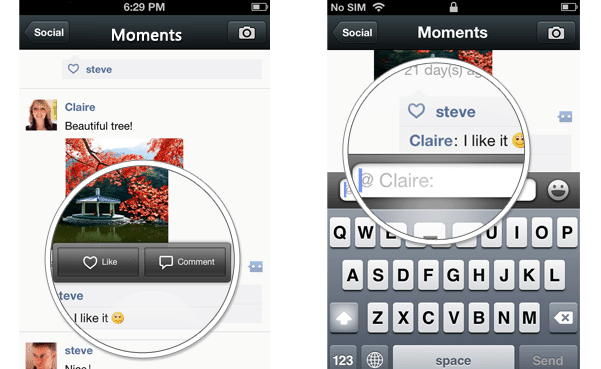 Users devote a lot of time to reading the latest news and watching funny videos. More users read news on social media than on specialized websites, TV, and newspaper combined. 40% of users check the news on WeChat while only 20.6% of respondents read them on other websites and 8% learn it from TV programs.

Online shopping has become commonplace for Chinese consumers, and it is a very popular alternative to shopping in store these days. In 2016, the proportion of WeChat online shoppers more than doubled and stood at 31%. 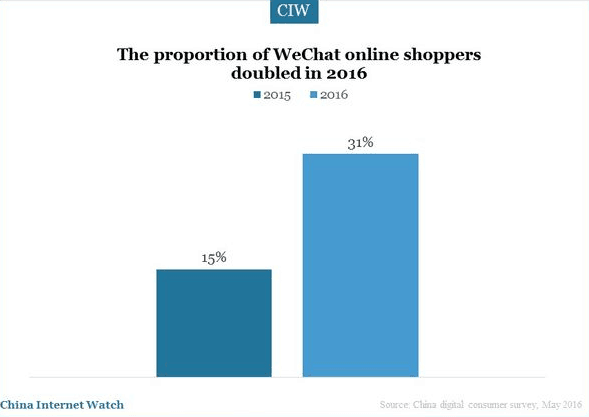 In the past few years, many new fashionable brands created WeChat public accounts in order to conduct marketing of their products to Chinese consumers on WeChat. 80% of official accounts post various content on business days. 36% of all posts appear on WeChat on Wednesday and Friday.

4. WeChat as a digital wallet

One of the key features of the Chinese consumer culture in virtual communication is that at present, many people use WeChat for payments and transactions.

Nowadays, the very nature of the Chinese consumer behaviour has become very digital. Many people can be called digital natives. It is estimated that 200m users attached their credit cards on the application in order to make payments for purchases or transfer money over the phone.

70% of the application’s users spend more than 100 RMB per month, and the number of people using the application for transactions is expected to grow. When asked which payment they prefer – WeChat payment or a credit card payment – 53.6% of respondents indicate that they will consider paying with WeChat if given an option.

Thanks to WeChat, Chinese tourists may go cashless overseas. They can avoid annoying credit card charges while travelling outside of China. The expansion of the platform’s cross-border payments service allows Chinese tourists to make payments in more than 20 countries worldwide.

The main reasons for using WeChat for online payments are: 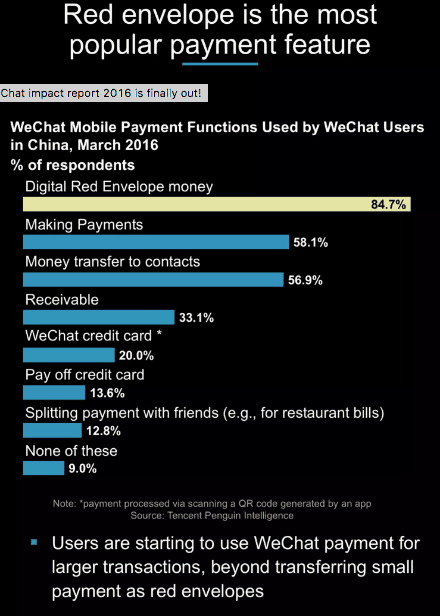 The Red Envelope Payment Feature was a real breakthrough in the Chinese consumer culture in a virtual universe and took the users of the platform by storm. The concept is based on the Chinese tradition of hongbao (red envelope) to give money to family and friends as a gift. Tencent reported about 2.3bn transactions as of the 1st of January 2016.

WeChat is more than just chatting, sharing content, and making payments. Over 60% of consumers use WeChat Life Service. Users can order wine and food, send instructions to their butler, and do some showrooming. They can also share a real-time location with friends, pay utility and phone bills,  book appointments with a doctor, and so on.

Prospects for the future

Tencent’s WeChat is a paradigm of innovation in internet communication. It has impacted not only the world of technologies but also the everyday life of the Chinese consumers. This unique platform has managed to combine the functions of several applications into one interface. As a result, we have a vibrant product which outperforms WhatsApp and other western communication platforms. WeChat is a rainbow of functionality compared to its colourless competitors.

Therefore, many western companies zealously monitor WeChat and its steady march of advancements and upgrades so that they can weave strategies of transformation and change for their own applications. Mark Zuckerberg’s recent decision to split the Facebook and Messenger applications might have been underpinned by a practical desire to emulate the multifunctional approach of WeChat.

Most of the international companies that want to enter or probe the Chinese market consider creating an account with WeChat. This is an essential step towards launching their products and marketing them to Chinese consumers, and towards being successful in China. At this point, it is absolutely impossible to imagine that any other application may take on the might and fame of WeChat for Chinese people and business entities.

WeChat is China’s most popular mobile messaging application, but it still falls short of WhatsApp’s 1.2bn active users. Yet, WeChat is swiftly catching up to WhatsApp and Messenger. Although the Chinese consumer behaviour is evolving fast, WeChat will most definitely remain a vital and organic part of the Chinese consumer culture.

Understanding the Chinese consumer behaviour and the latest trends in internet communication very well, we can conclude that in the future, the application might be crowned the king of global mobile messaging and the king of Asian digital world.

Here at Dragon Social, we pride ourselves on understanding the changes in the digital market. As the social media landscape in China is so different from other countries, it can be daunting for new companies who want to move into this new market.

Many companies choose to hire a digital marketing agency because they understand their limitations. We have key knowledge about the market that you may not. If you would like to know more about the packages we can create for you, or the all-in-one services, visit our page!

If you have any comments about the Chinese consumer behaviour trend in 2017, please feel free to leave your messages below!

Raymond is the Head of Growth at Dragon Social. He teaches small businesses how to grow in China. His insights on China has been featured by Marketing Interactive and various China marketing publications.