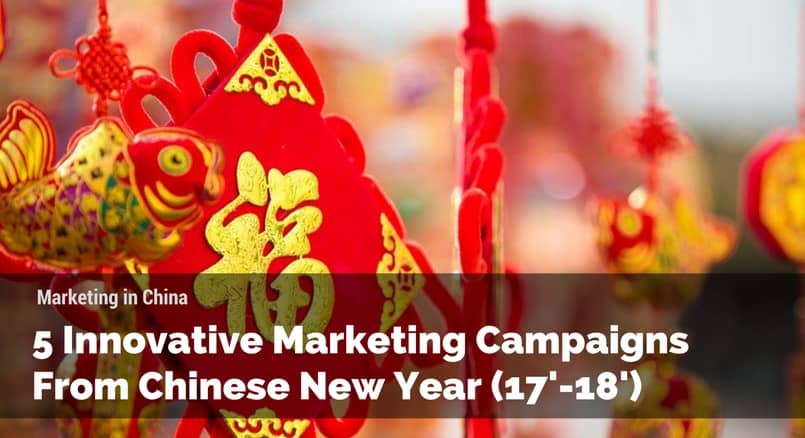 Taobao, Alipay, Weibo, Apple, Coca-Cola. Everyone is familiar with these names, but are you aware of their actions in Chinese New Year? These five big brands surprised us all last year with their brilliant marketing ideas.

2018’s Chinese New Year holiday is right around the corner. This most celebrated festival often schedules in the middle of February. During this period people watch CCTV’s New Year’s Gala ‘Chun Wan,’ do Chinese New Year shopping (buy candies and new clothes) and give out ‘Hong Bao’ (red packets with money inside) as tokens of luck and happiness.

The purchasing power of the 1,383 million Chinese population is beyond imagination. During Chinese New Year global companies battle it out to get a slice of the action. However, before making any decisions, businesses should understand China more and the traditions associated with Chinese New Year.

If you’re still struggling with your Chinese New Year marketing campaigns, come and take a look at these five inspiring examples!

Being the biggest online shopping platform in China, Taobao has made an absolutely mesmerizing amount of profits. In 2017, the company’s revenue reached US$2,616 million.

With the rising of E-commerce, Taobao undoubtedly becomes a channel for all types of shopping, including Chinese New Year shopping. Last year, Taobao made an excellent campaign to bring the practice to another level.

Re-creation of a Traditional Chinese Painting

Taobao created a cartoon version of a famous ancient painting: Along the River During the Qingming Festival. The historical artwork is well known for capturing the daily life of people. It also shows how the markets in the capital were prosperous and bustling. 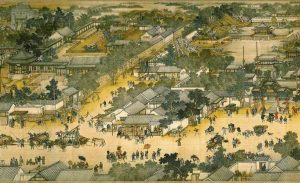 The above photo is the ancient painting: ‘Along The River During the Qingming Festival.’ 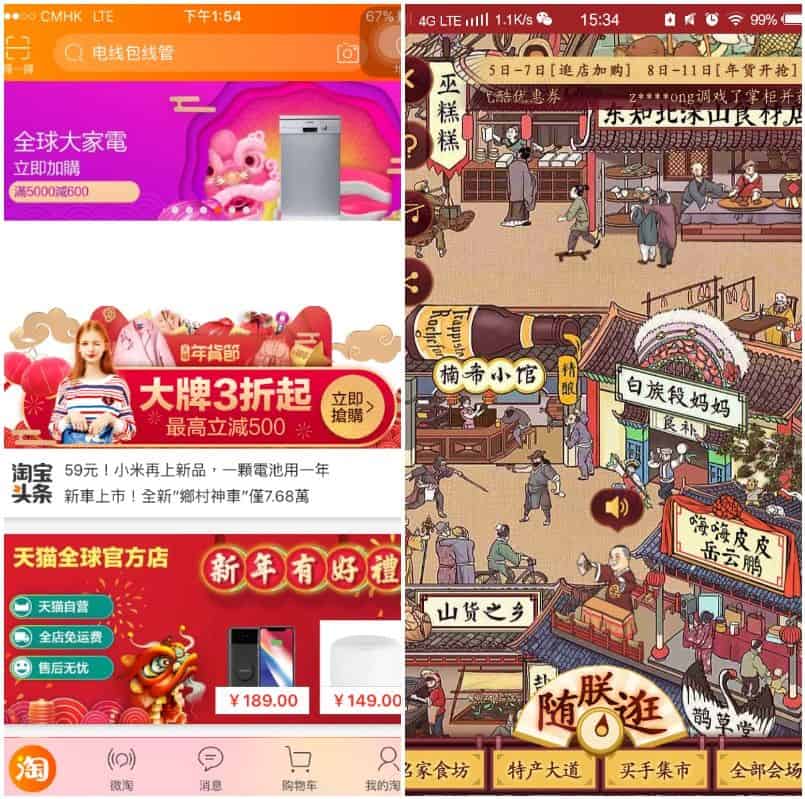 From the above photo, Taobao remade the original user interface of the app with the cartoon drawing ‘The Main Street for Lunar New Year Shopping.’ Users could access different categories of products by clicking on the picture or performing a direct search. The beautiful and creative design attracted the community immediately after its release. The number of transactions almost instantly increased at a shocking rate.

The painting is a household name in China, and Taobao wisely linked itself to a traditional symbol of shopping. In the time of Chinese New Year, it is crucial for Chinese customers to notice how your brand connects to their culture. It can bring incredible results to your business.

Combining Traditions with Technology and Games

Alipay is the leading online payment tool in China. There are over 502 million registered users today, utilizing Alipay fully in all aspects of their daily routine.

Currently, Chinese prefer to give out red packets, ‘Hong Bao,’ through social media due to the influence of online payment tools. In 2017, Alipay seized the opportunity with the help of one of the latest technology trends, Augmented Reality (AR). 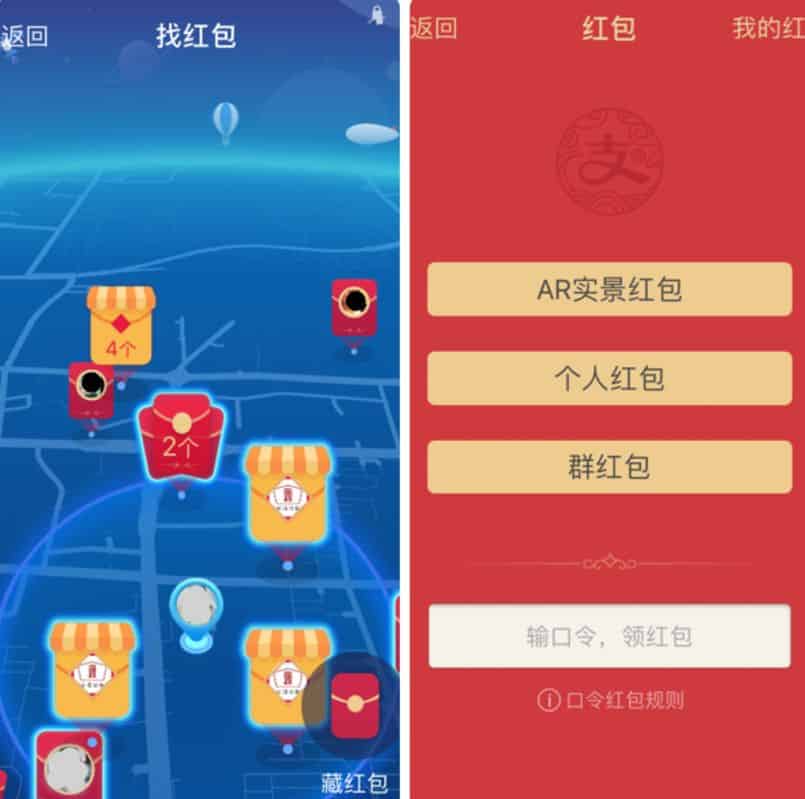 Similar to the location-based game Pokemon Go, in this marketing campaign, Alipay users can search and collect virtual Hong Bao in reality. They can scan the objects in real life to hide the Hong Bao, then send clues to encourage their friends to find it out.

Various brands such as P&G and KFC quickly supported the game. Mixed companies in all sizes gave out cash and gifts to users to make sure Chinese customers heard their names while joining the remarkable marketing campaign.

Alipay AR Hong Bao received huge amounts of attention after launching. They distributed 200 million RMB through the game and successfully brought 120 thousand new followers to their official Weibo account. It is apparent how marketing in Chinese New Year matters to both small and big businesses.

3. Weibo: Take Over the Online Community

Live Stream of the Biggest Chinese TV Show on Weibo

Weibo is the Twitter of China. The micro-blogging platform also functions as a social media site. It has 340 million active monthly users, which 90% of them access through their smartphone. As a leader in the industry, Weibo also made a big move during 2017’s Chinese New Year. 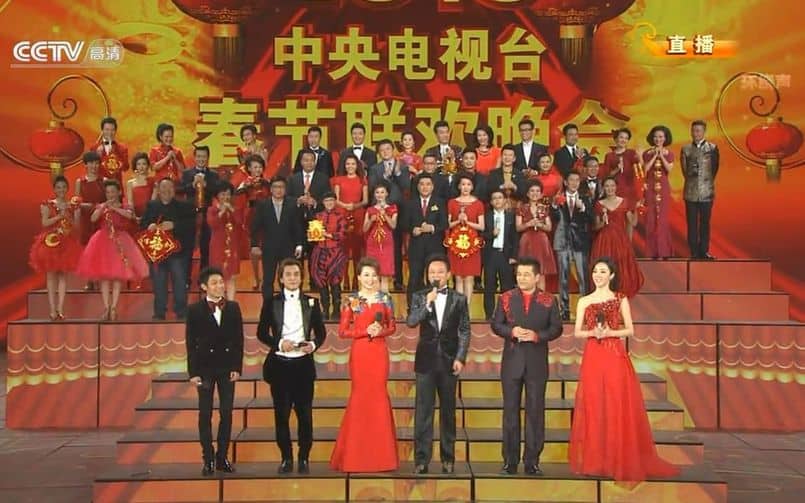 The classic New Year’s Gala of CCTV has been a custom of Chinese New Year.

As mentioned before, Chinese eagerly anticipate watching CCTV New Year’s Gala, Chun Wan each new year. The audience numbers can reach almost 100 million, reflecting the significant influence of the program. In 2017, CCTV granted the right of Chun Wan to Weibo. This allowed users to watch the live performance and blog with others simultaneously. Weibo did a terrific job in encouraging User Generated Content (UGC), causing a huge spike in engagement and pushing the platform to the next level.

The Campaign Strongly Activated the Platform

The Chinese online community was extremely enthusiastic, resulting in fantastic figures. There were 59.91 million related blogs created, and the number of times read of the hashtag ‘Chun Wan’ accelerated to 5 billion. On the Chinese New Year’s Eve, Weibo’s active daily users exceeded 154 million. The view rate of all videos on the platform reached 3.329 billion. (Read more about Weibo.)

During Chinese New Year, Weibo has vast influence. It is indeed challenging to compete with the leader of the industry, but companies can enjoy benefits in joining Weibo’s Chinese New Year marketing campaign. The viewing rate of videos posted on Weibo is impressive, which means Weibo can bring high levels of exposure to its sponsors. Companies should monitor trends on Weibo and stay up to date as much as possible.

Can you believe that you can draw traditional Chinese paintings on digital devices with a delicate touch? No way? Apple proved it.

Observe the following photo; you can see how detailed the painting is. An artist used Apple products, such as iPad Pro, MacBook Pro, and Apple Pencil, to create this Chinese New Year drawing (Nian Hua).  The company also emphasized how their products work well with Adobe Photoshop and Illustrator, ensuring the process to be smooth. 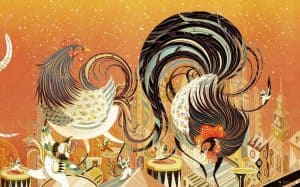 This colorful Nian Hua describes the symbol of prosperity by chickens.

In 2017, Apple Inc. invited young artists to create five Chinese New Year Drawings (Nian Hua) according to idioms. The company put these beautiful paintings on their official site to send the Chinese New Year blessing to customers. Other festive background pictures for iPhones and computers were available as well.

Linkage between Traditions and Your Products is Important

Apple cleverly put the traditions and the products together. At the same time, promoting their capability of providing advanced technology. The Nian Hua campaign advertised the company during the Chinese New Year and showcased the best features of products to convince their customers.

5. Coca-Cola: Red is the Color

It has been quite regular for Coca-Cola to release distinctive version of cokes. In 2018, the company initiated the celebration of Chinese New Year in Hong Kong by printing different local slang phrases on the cans. Coca-Cola also promoted the slogan ‘Share A Coke’ as well, encouraging customers to purchase and collect them. 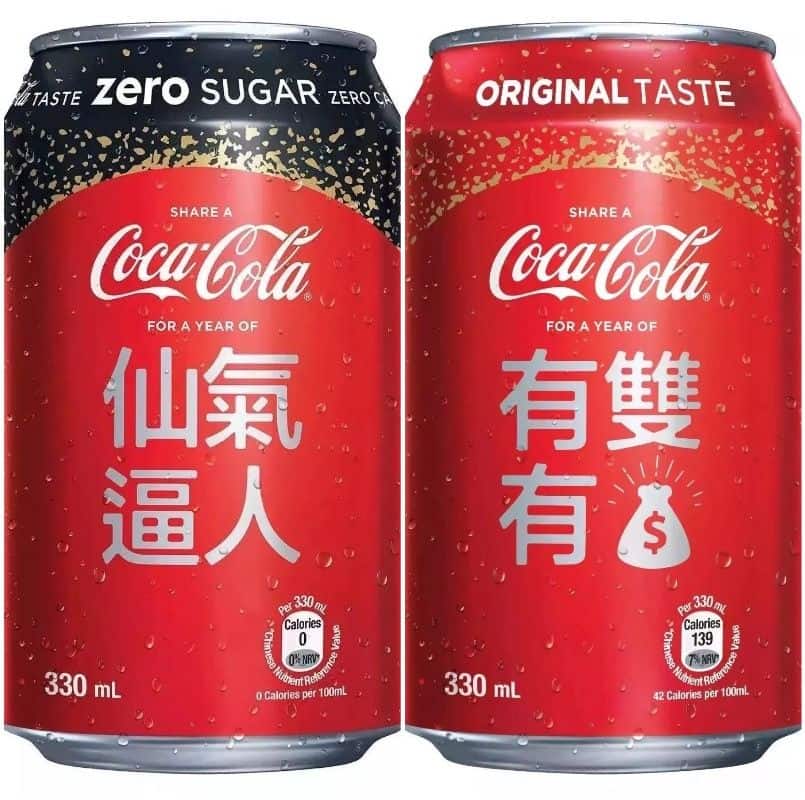 The local slang phrases on Coca-Cola cans have a sense of humor and festive blessings.

On the other hand, Coca-Cola created two adorable figures, known as Fu Wa (In Chinese their names mean Lucky doll). These two figures played a prominent role in Coca Cola’s advertising in Mainland China. The company ran a series of advertising campaigns featuring the two in China. For instance, after scanning the red circles on Coca-Cola packaging, an animation would appear on the customers’ phones featuring the figures sending out blessings to the user. 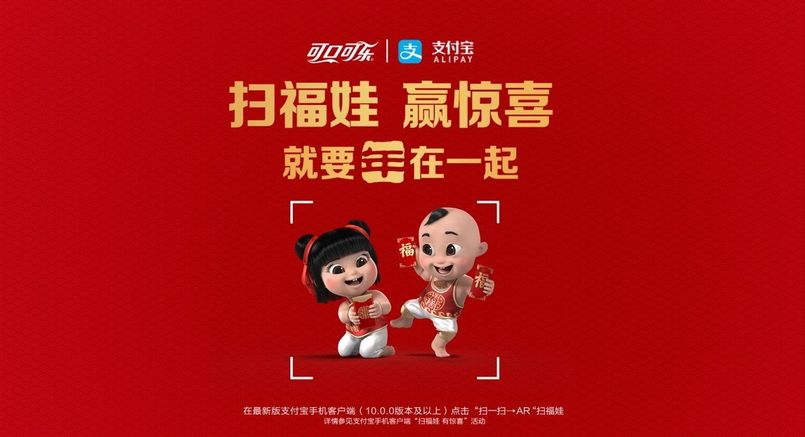 The above photo is the two cute mascots of Coca-Cola.

Coca-Cola made good use of its original logo color: Red. The traditional red is already a symbol of China and Chinese New Year, and the tailor-made marketing campaign of Coca-Cola for the festival was undoubtedly a plus. It also showed how to build up the image of a brand among Chinese customers.

Companies longing for Chinese customers should understand that Chinese New Year matters a lot. Well-thought-out marketing campaigns during the period are critical for brand awareness. Furthermore, before marketing to China, there are other issues businesses need to know.

The Dragon Social team always stays up-to-date. If you have any questions about China marketing or the creation of some creative campaigns of your own, feel free to contact us!

A passionate marketer who wish to pursue a career in China marketing. Studied at The Hong Kong University of Science and Technology. Currently working in the Dragon Social team to collaborate with professionals.