Product Placement – How to Engage the Chinese Market? 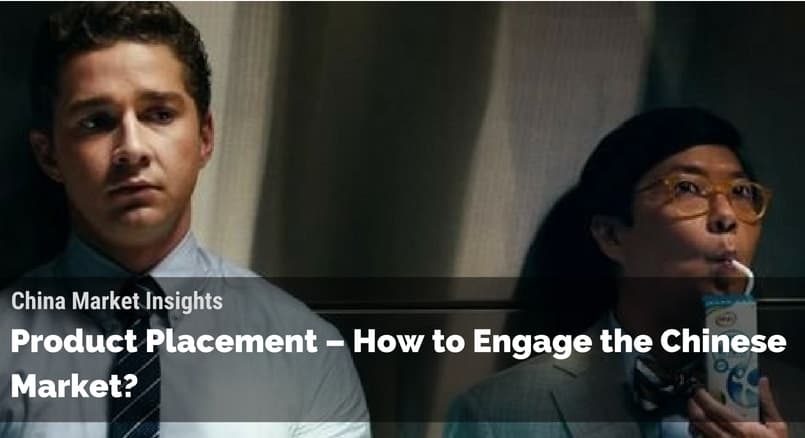 Product Placement – How to Engage the Chinese Market?

Have you ever watched a movie or a television show and noticed that certain brands seem to jump out at you?

Product placement, instead of interrupting messages that appear in the middle of a program like the traditional advertisement that we are used to, influences viewers using “planned and unobtrusive entry of a branded product into a movie (or television show)” (Balasubramanian, 1994). As a form of advertising and promotion, product placement places brands, products and other services in an indirect manner through movies, television shows, games, music or others entertainment content to generate visibility and maximize audience exposure. 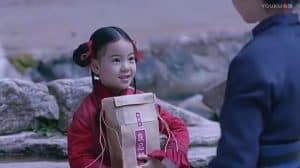 It is also known as embedded marketing or brand integration. Some of it stays in the background, while others become part of the story itself. They make us roll our eyes and have us reaching for our credit cards at the same time. Sometimes subtle, most times not. When done well the benefits of it are clear and huge, not just for brands but the production companies and fans as well.

In the context of China, product placement is an increasingly common occurrence in both Chinese movies as well as on a variety of TV shows. This advertising method has been creating a huge impact for many years.

According to PQ Media’s Global Advertising & Marketing Revenue Forecast 2018-22, global digital and alternative media revenues are on pace to grow 11.6% in 2018 to US$496.08 billion, accounting for more than 38.2% of the total advertising and marketing revenues. Patrick Quinn, President of PQ Media, said that although a good portion of TV dollars are still being allocated to traditional ad pods, more money is flowing into product placement, digital ad networks and other branded entertainment. In China, one of the strongest trends in the advertising and marketing industry is the eagerness to build brands through branded content deals with television programmers, online video sites, film companies and other relevant sectors.

As product placement is on the rise worldwide, both local and international brands are increasingly choosing to utilize this method to promote and localize their products and services in China . This advertising method allows them to reach out to their target audience effectively. It offers a unique and innovative way of  increasing visibility among the Chinese consumers.

It is not difficult to find examples of product placement and branding in Chinese movies or television shows. As a matter of fact, it would be much more challenging to find a movie that doesn’t contain any element of this. Cinema in China has been growing rapidly with a rising middle-class population who is now frequenting the cinema more often. This brings out an opportunity for product placement in the Chinese film market. 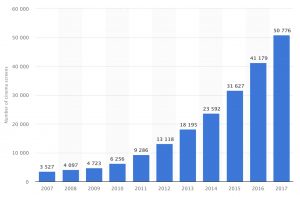 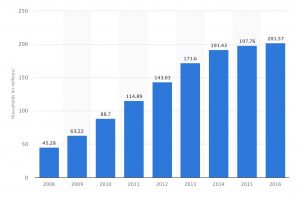 Number of digital TV households in China from 2008 to 2016 (in millions). Image source.

Except for the common benefits such as a long shelf life and huge exposure, product placement has unique advantages which have helped gain it more and more proponents. Most notably is perhaps the ability to effectively target a market and establish an affiliation between a product and a celebrity or lifestyle. It creates increased brand recognition and positive brand affiliation as it is associated with television and movie stars.

1.  It can help a lesser known brand skyrocket. If you are a brand which hasn’t quite made a mark in the Chinese market or if you are still struggling to find ways to create traction, working with production houses to include your products or mentions of your products in a hit movie or show can be a good way to get started. An effective product placement not only exposes audience to the product, but also helps to foster liking for the product. This is especially so if the movie or show has high viewership, indicative of its popularity. The popularity of a celebrity who uses or owns the product could translate to positive feelings toward to that product.

2. It makes viewers associate a product or brand with a certain lifestyle. In the James Bond movies, the British Secret Service agent famously ordered a martini, “shaken not stirred”. Because of this line, moviegoers have since associated martinis with bravado, opulence, adventure and determination.

Ode to Joy, a popular Chinese television series about the lives of 5 women who share an apartment in Shanghai, enjoys a tremendous viewership of over 100 million Chinese viewers. Similar to the American comedy-drama Sex and the City, Ode to Joy portrays strong, modern Chinese women and their work, love and family life. In one scene, one of the prime characters of the show grabs a box of Weet-Bix, clamming that she prefers western-style breakfast as opposed to the traditional Chinese breakfast. As a result, the Australian cereal brand’s popularity skyrocketed in China. 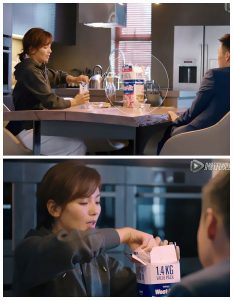 3. It makes viewers feel like insiders of the story. The audience are watching a scene in a movie or television series when for some reason a familiar jingle from a product they know starts to play in the background, or one of the main characters makes a clever reference to a product. If the audience catches it, it provides them with a sense that they’ve become some sort of an insider, that they are part of the story. Chinese audiences appreciate that feeling of familiarity in the programs that they watch.

The effectiveness of product placement can easily be seen in the popularity of the bracelet in the popular Chinese drama Sweet Dreams. In this drama, the couple find themselves able to be transported into each other’s dreams when wearing a bracelet that aims to improve sleep quality. The drama was a huge hit in China where it triggered a craze for the bracelet that the main characters were seen wearing. 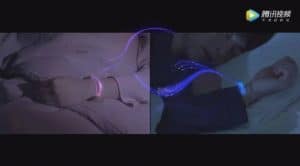 However, there are also some disadvantages associated with product placement.

1. It’s relatively expensive. With a significant population, Chinese movies, television drama and shows have an extensive reach that is able to hit billions of people. Most of them go abroad, which means an even bigger audience. Therefore, advertising through product placement isn’t going to be cheap. It’s almost always going to be a 7 figure investment (RMB) for a minimal placement and likely 8 million RMB or more for a brand to be involved with the plot of the movie or drama.

2. Competitive brands with similar products may cancel one another out. It is important for a product placement to create a sense of loyalty among the audience, but some movies and television shows simply include too many different brands from within the same industry. If too many product placements are seen by the audience, the effectiveness of the advertising gets canceled out. Think about it, have you ever seen Pepsi and Coca-Cola in the same movie?

3. The risk of high uncertainty. There’s a lack of control over how products are portrayed or incorporated into a scene or a storyline. Moreover, the advertisers barely have any influence over how successful the movie or show will be, making it extremely difficult to predict where to place brands for maximum exposure and effectiveness.

4. Consumers are easily offended by an overt hard sell. A product placement should be worked into the storyline in a manner that makes sense. If the brand or product is seen to be forced into the storyline where it apparently doesn’t fit, the consumers will respond negatively to not just the movie or show, but also the brand.

As was the case in the example of a milk tea brand called Xiangpiaopiao in the Chinese television drama Meteor Shower. The male lead drinks up 20 cups of milk tea in order to apologize to the girl he likes, which resulted in the audience laughing at the poor standard of product placement. Though Chinese consumers tend to be quite accepting of product placement, careful consideration still needs to be given when using this advertising method in China to ensure its effectiveness. 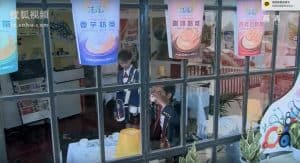 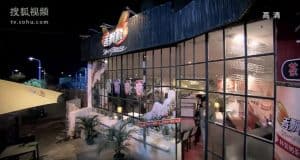 In the interest of marketing in China and in the light of the potential for further growth, it is crucial to begin to understand consumer attitudes toward key product placement variables to ensure effective communication strategies. Companies who wish to enter China require a deep understanding of how Chinese consumers engage with different kinds of media at each stage of the day and how they form opinions toward a purchase decision. Marketing plans and capabilities must be able to adapt to the changing market.

Dragon Social’s expertise can do all of these by designing different plans that suit your company as well as make the most of your budget. If you would like to know more about what we can do for you, visit our services page. Or, visit our website for more market insights and professional analysis!