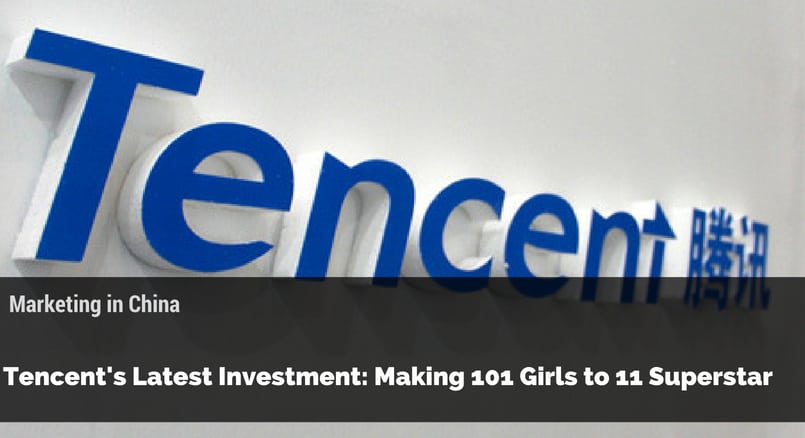 Two weeks ago, the most famous female talent show, Produce 101, in China came to an end. After ten rounds of fierce rivalry, 11 lucky girls were chosen by netizens to form a new female band called the Rocket Girls 101 火箭女孩 and they will be fully supported by Tencent and other entertainment companies. This talent show is described by media as the most successful talent show since Super Girl in 2004. Tencent also attracted massive attention as the main sponsor of this talent show. 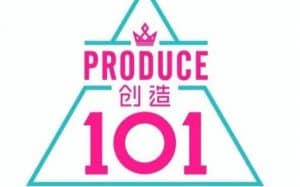 According to some databases, Produce 101 is the most watched online variety show from April 14, its launch date, until May 31, the last day of competition. The total amount of viewers reaches a high peak of 1.9 billion. The average amount of views on each episode was around 180 million. It is no doubt that Tencent created a successful rating monster. But, how Tencent do it and what kind of unique strategy did it use? In this article, we’ll analyze Tencent’s strategy behind the success of Produce 101. 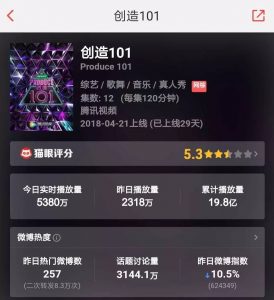 The statistical data of Produce 101

Table of Content(Click to read)

1. The Import and Localization of Produce 101 Read Now

2. Tencent and Its Partners Read Now

5. 3 Tips You Should Know about China’s Celebrity Economy Read Now


The Import and Localization of Produce 101

Actually, the talent show Produce 101 was not the first of its kind in China’s talent show business.

Produce 101 is based on a talent show produced by YMC Entertainment in Korea. The top goal of Produce 101 is to select talented candidates from ordinary people or less-famous artists to form a new band and promote them.

Yet, Tencent sensed the opportunity and potential of this type of talent show and bought the copyright in 2016.

Certainly, due to the homogenization of talent shows in China, it will be highly unsuitable for Tencent to adopt the original version without any modification or changes.

Thus, Tencent added some new materials and changes to Produce 101. Tencent’s localization of Produce 101 helped lead to its huge success. China’s Produce 101 had three major changes when compared to the Korean version.

First, Tencent changed the competition rules, it offered lost candidates a second chance to get back to the stage. For example, nobody will actually be ejected but will still be allowed to participate in training with others before the last three rounds.

Second, the diversification of candidates. As mentioned above, candidates who participate in Produce 101 have different backgrounds. Hence, in order to give the audience more choices, Tencent generally divided candidates into two different groups, talented and diligent. 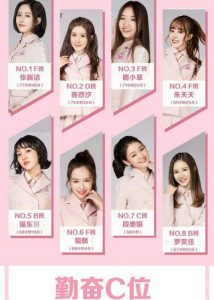 A list of diligent candidates, most of them are less talented but willing to work hard

Last but not least, Tencent also incorporated a challenging system into the competition. It provided a chance for lower-voted candidates to challenge popular ones after undergoing training.

In short, these changes made Produce 101 more varied and fun to watch, which were the dominant reasons this talent show was able to attract attention nationwide.


Tencent and Its Partners

Speaking of a nationwide talent show, it is undoubted that Tencent could not achieve this goal without any other partners. Produce 101 is a carnival for both video websites and entertainment companies.

Although Produce 101 claims their top goal is to select superstars from ordinary people, the number of real ordinary candidates in Produce 101 was pretty small. Most of the candidates were from different kinds of entertainment companies.

Besides candidates, Tencent also invited 5 of China’s most famous singers and dancers to form the judge panel. This was also a successful endorsement of Produce 101. In the final round of the show, Tencent even invited 5 more stars as guests.

When compared to other candidates, it is certain that those from the professional entertainment companies had an easier time attracting attention and approval from the judges and audience. However, it is still not a likely affair for the candidates to rank in the final 11. 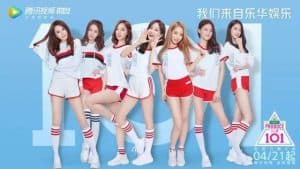 Candidates from Yue Hua Entertainment Ltd. was where the first place, Meng Meiqi 孟美岐 came from

Surprisingly, even when 70% of the candidates are not from the general populace, the audience seemed to be fine with that.

The most important core value of Produce 101 was to “redefine the meaning of female group”. Moreover, it also successfully convinced the audience that their support was a part of “creating the best female group”.

So, how did Tencent use their marketing strategy to promote the core idea of Produce 101? The analysis of Tencent’s secret will be explained below.

It is known to all that Tencent owns two of the most famous social media platforms in China, WeChat and QQ. In the campaign to promote Produce 101, Tencent used these two excellent platforms as their strongest weapon of promotion. 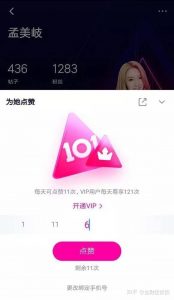 The voting system on WeChat

A while back,  Tencent has implemented a voting feature on both WeChat and QQ. Every fan who wanted to vote for their favorite candidate had to log on to their WeChat/QQ account and follow the official account of produce 101.  This helped bring new users onto the platforms, and stay in touch with what was going on on the show.

The voting system had a few rules. Normal user only had 11 votes per day. But, in order to provide another way for users to show their support for their idols, Tencent introduced the VIP system. Users could purchase the VIP membership for 88 RMB to get 121 votes per day.

By creating different groups among the audience, Tencent had successfully made the voting into a competition between different supporters. The audience in this competition  was willing gto do whatever they could to help their favorite candidate to get a better position. 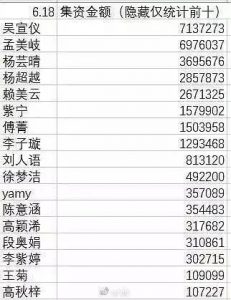 The total number of crowdfunding for Top 17 candidates

Knowing the power of China’s “fan economy”, Tencent literally made Produce 101 a talent show for the audience to decide. This was a smart strategy that helped mobilize the enthusiasm of the fans to make it go viral.

For example, some fans spontaneously formed different kinds of supporting clubs to solicit votes and raise money for their idols. Some reports suggest that Wu Xuanyi 吴宣仪, who got the second place in the final round, received 7 million RMB for soliciting and promotion.

In summary, Tencent’s strategy was extremely successful. This strategy creates a new model to be used for the celebrity economy. Tencent’s model brings more immersion and participation from the into the talent show. It created a feeling that the audience is growing with their idols.

Tencent’s new model of talent show has also created a lot of hot issues, how these issues help the related candidate and Produce 101 become so famous can be seen in our next section. There is a case study down below for a better understanding of Tencent’s model.

With the development of Produce 101, one of the candidates, Yang Chaoyue 杨超越, has become one of the most famous but also the most controversial figure from Produce 101. She got the third rank in the final round, but her success was criticized by many people. 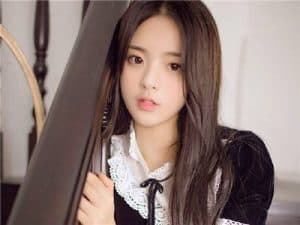 Yang Chaoyue, the most controversial candidate in Produce 101

Yang Chaoyue was born in a small village in Jiangsu province. However, unlike most girls, she joined WenLan Entertainment Ltd right after several years of working in different industries. Her primary goal to join this company was the higher salary.

Nevertheless, compared with other candidates in Produce 101, Yang Chaoyue came off as less authentic and seemed highly trained. Her stage presence was far from satisfactiory as an idol. In addition, she was also considered mentally immature, often crying during the competition.

Yet, surprisingly, Yang Chaoyue ranked very high in every round. In fact, she was always on the top 5 list in every round. Nevertheless, she seems to be preferred by Tencent, like the video above, Tencent modified her singing a lot when Tencent released the video.

Of course, a lion’s share of the audience was not satisfied with Yang Chaoyue’s performance. However, her fans argued that they loved Yang Chaoyue because they think she is “real” and “willing to express her weakness in front of the audience”.

Surprisingly, Yang Chaoyue herself said that she deserves these praise and credits. “Sometimes when luck prefers somebody, it is super reasonable for others to take it for granted.” Said by Yang Chaoyue, in an interview right after the final round. 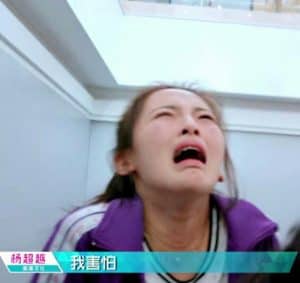 Yang Chaoyue freaks out in the middle of one episode

Yang Chaoyue’s attitude was considered to be in opposition to the traditional values of Chinese society. She lacked experience, but showed again and again that she was not willing to improve herself. Yet, she is still unbelievably successful. This kind of public figure naturally stirs up controversy among China’s population.

Right or wrong, Yang Chaoyue attracted enormous attention, no matter how many haters or supporters.


3 Tips You Should Know about China’s Celebrity Economy

1. The celebrity economy is all about attention. Attention means there is a huge number of people that could be your potential customers or learn about your brand. The ultimate aim of a successful online marketing campaign is to attract people’s attention as much as you can.

Naturally, it is extremely difficult for companies to develop their business in China without any help or guidance. We understand the difficulty and we are here to help! Dragon social has the best strategies and the most professional team to help you anytime, anywhere. Please do not hesitate to contact us and tell us what you need!

We can design different plans that will suit your company as well as make the most of your budget. If you would like to know more about what we can do for you, visit our services page!

Also, please visit our website for more information and professional analyze about marketing in China market! We are welcome to interact with us, tell us in comments what kind of topic you would like to watch in our next article. Thanks for your reading!

Dragon Social stays are up-to-date with any trends in China social media marketing.  Contact us or read more to know how to be a successful short video celebrity in China? Check them it out here:

Acquired Master of Arts degree at The Chinese University of Hong Kong. A native of Mainland China with a strong passion for marketing and the high-tech industry in China. Currently working for the Dragon Social as a content marketer.